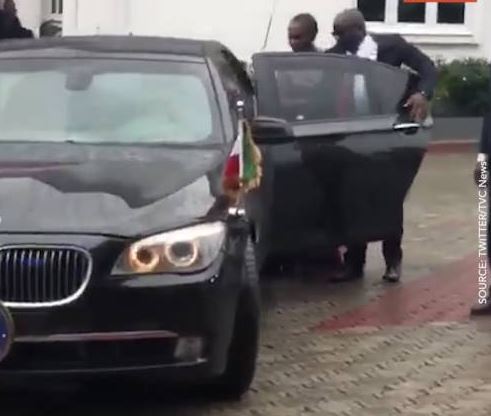 The governor of Rivers State, Nysome Wike has pushed his way into the Port Harcourt residence of the embattled former Managing Director of the NDDC, Joy Nunieh to rescue her from the police who had earlier invaded her house to effect an arrest.

Narrating her story, Mrs Nunieh said while she was preparing to go to make her submission to a committee of the House of Representatives today,  the Commissioner of police called her for her address which she gave him. Later, she was told the CP was downstairs and when she got down, the CP wasn't there but his Deputy and the policemen around who had come to take her away. She managed to push back the door and went upstairs, then called on Gov Wike to report the situation. She said the governor came almost immediately and took her away after finding out that the police had no warrant for her arrest. She said the policemen tried for about an hour to break the security door to no avail.

The governor moved her to Rivers State Government House where she feels safe. She thanked Gov Wike who had vowed that he would not allow anything to happen to her, a "Rivers State girl."

One would wonder why the police would come to arrest her without a warrant, on the day she was supposed to appear before the National Assembly.

Joy Nunieh is having a running battle with Godswill Akpabio who is the Minister of Niger Delta Affairs.