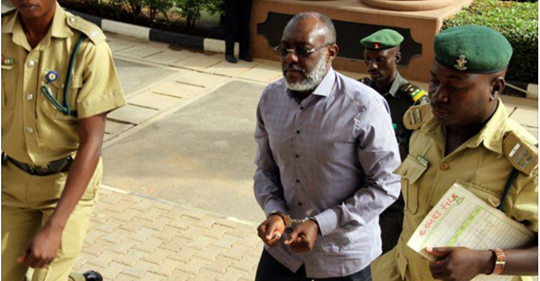 Olise Metuh, former PDP Publicity secretary has been found guilty of laundering N400 million, a fund he received from the National Security Adviser, which he claimed was at the directive of the former President, Goodluck Jonathan.

Justice Okon Abang of The Federal High Court, Abuja on Tuesday ruled that a "former National Security Adviser, Sambo Dasuki, unlawfully transferred the sum of N400 million to the defendants in November 2014".

Those who testified against him include Eno Mfon Efiong, a staff of Diamond Bank and an account officer of the defendant, who confirmed to the court "a credit transaction from the office of the National Security Adviser into Destra Investment Limited account".

Another witness was Mr Ibrahim, a bureau de change operator, who told the court that "he exchanged the sum of $1million for Destra Investment. He said he was given the money by a certain Nnena Nicole Ararume in 2014. He said the money was exchanged at the rate of N183 per US dollar, and transferred into the account of Mr Metuh’s company. "